Can I stay on your couch, stranger? Being homeless travelling.

by Amelia Easten
in All Things Travel

My flat in Taipei doesn’t have heating. It’s COLD. I could buy a heater, but I’m not really at home enough to justify the expense. Three weeks ago it was still beautiful weather, and so a friend and decided to go to the beach before it turned wintery again. For the first time in my life, I stayed in a hotel. I’ve always worked to earn money to travel before, but I’ve never earned enough to afford luxuries.

Three and a half years ago I came back from being in South America for three months exhilarated by travel and looking for any way possible to continue my wanderings. So I started using couchsurfing (www.couchsurfing.org) much to the disgust of my flatmates, who definitely weren’t fans of strange men and women off the streets who smelled a bit funky (generally the first thing they do, and certainly the first thing I always do is ask to take a shower) wandering into our kitchen and being given cups of tea. The three particularly wonderful things about couchsurfing are that it drastically cuts your travel budget, it can make traveling alone a much less lonely experience, and it can show you a far more real side of the city than the one you see otherwise. A hostel in Europe costs around $15-25 a night, depending on the city, and that’s for the cheapest dorm room where you’ll be sardined in with a lot of other travellers. You’ll probably be eating out, because cooking a hostel is awkward, even if they do have a kitchen. This adds another $10-20 a day, if you’re eating cheaply but with okay nutritional content (I’m not counting the travellers I know live on bread and that’s it).

If you couchsurf, though, you’re looking at a free bed. And often the use of a kitchen, so you can make proper food and have a proper food budget. It’s nice to cook for your host or take them for a meal, but that doesn’t blow the budget if you’re staying for a couple of nights. This takes the daily bed and board budget from around $40 to $10 a day. Suddenly, travelling between terms as a student when you have no money becomes possible again.

Except for when you don’t have a bed, and spending money on a hostel seems to not only be an extreme waste of money by this stage, but also has a sense of failure to it. There’s something anticlimactic about saying ‘I couchsurfed right down to the southernmost point of Crimea, except for the night when I couldn’t be bothered to send requests so just stayed in a hostel’ (I couchsurfed all the way, that’s another story).

This has left me in the awkward situation of being bedless and roof-over-headless, with nothing working out at the last minute like it usually does. Three times to count, in Krakow… Krakow again, and Salzburg. The first time I pulled the solo female traveller card that I very rarely do and don’t really respect myself for doing – I hung around in a club until I found someone who would let me sleep on his couch. I emphasised that I just wanted to sleep on his couch. He seemed very confused about what was going on, but acquiesced. This may seem shady, but one of my cardinal rules of travelling alone is don’t drink much if I don’t have someone I trust around, and don’t do any sort of substances. I don’t ever want to lose control of myself and not know what happened.

The next night I still didn’t have somewhere to sleep, and I decided to spend my day on a  free walking tour. This is a fantastic way to see a city, and I completely recommend it if you’re ever in Krakow or any other city that does them. Worrying idly about not having a bed, I began to pay more attention to our guide. He seemed pretty eccentric. Very eccentric. ‘Do you couch surf?’ I asked. ‘Of course!’ he replied, ‘I love crazy people!’ It seemed legitimate. ‘Do you have a spare couch tonight? I couldn’t find a host.’ ‘Of course! Meet me outside the Mosque at 8, we’re going drinking first.’ And so it was that after the walking tour I joined him and a few others from the walking tour for a pub crawl. I learned a bit more about my host while we were downing rainbow shots of vodka that were more sugar than alcohol, including the information that he was a Lord of the Rings fanatic. So much so that he moved to New Zealand and hung around the streets trying to score a part in the Hobbit movie. You can read an article about it here: http://www.odt.co.nz/news/queenstown-lakes/194741/all-days-work-goblin 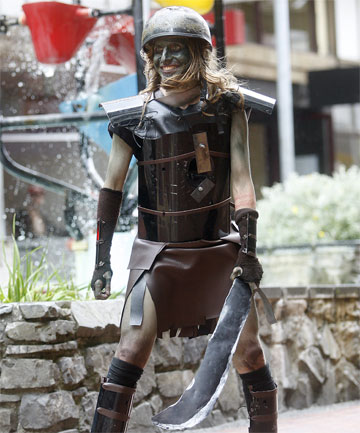 My host in Krakow, Poland. He looked a little different at that time.

That night I and two lovely girls from Andorra stayed in his bedsit apartment with him, one of the girls and I in the bed, the other on the sofa bed with him. There was a lot of giggling from the bed, but I’d had a little too much cherry vodka and fell fast asleep while the party carried on around me.

The next day I went to stay with an actual host from couchsurfing who had finally accepted.

A year later I was in Munich, and heading to Salzburg, hitchhiking with my then boyfriend. There’s a noticeable difference in how easy it is to find a host when you’re two people. I know myself I like to host solo travellers much more than couples or friends travelling together, mainly because I feel I get to know them much better. I also feel more bound to help out solo travellers in a fix, and I’m sure that one of the reasons I get hosted so easily when travelling alone is that people feel the same way. One person without a bed inspires far more sympathy than two.

As we were waiting at a gas station by the border of Austria and Germany, I got a message from a woman called Bambi. Bambi said she would be able to host us, and we should let her know when we got to Salzburg. ‘See!’ I triumphantly told my boyfriend, ‘I told you things always work out!’ He muttered something and sloped off to smoke down a nearby bank again. It was cold, and had been raining for hours, and we were soaked because we’d been standing there for hours. This gas station was failing us miserably, and we’d been offered rides to everywhere except Salzburg. In retrospect, we should have taken one of them.

Finally a young man in an ancient and battered VW pulled up and told us to get in. It had been an hour and I hadn’t had a reply from Bambi, but I wasn’t worrying too much yet. He told us he was about to study Sports Sciences, and he was staying overnight with a family friend. We vaguely attempted to score a couch, but it clearly wasn’t going to happen. He dropped us off at a motorway station on the edge of the city so that I could get wifi and see if there was any word from Bambi. It was now very late, about 11pm. I was starting to worry a little. Sure enough, no word. ‘Let’s walk into the city centre at least,’ I suggested. ‘It might give her a little more time to reply.’ My boyfriend didn’t seem optimistic, but agreed. The rain had at least gone off a little.

We found shelter in one of the only places still open: the bar of a boutique hotel. I ordered a cup of tea to warm up with, and he ordered a beer and went outside to stress smoke frequently. A group of middle aged and plummy accented English business men came in and sat down at the table next to us, shooting odd looks across from time to time. We were two very, very scruffy bedraggled hitchhikers, with limp cardboard signs to previous destinations strapped to our bags, sitting in very civilised surroundings. I’m not sure I’ve ever felt as rough and out of place as I did then.

It was now 12.30am, and still no word from Bambi. The barman was beginning to shoot us annoyed looks, so we left and went back to roaming the streets. We found a hostel and tried to convince them to let us have one bed between the two of us, but they wouldn’t and at 18 euro a night, we weren’t willing to get one each. We found some Koreans outside the hostel, but they really weren’t much help and we didn’t thing we could smuggle ourselves in amongst them. They also didn’t seem to speak any English, as became evident after us talking about them well within earshot for a considerable amount of time raised no reaction.

The Koreans went inside, and we got bored and wandered off. We found a very shady Gentleman’s club, and a cat that danced when I stroked its back. We got rained on again. Unlike Taiwan, where there are also elderlies on bicycles, Berlin, where there are always pervy Turkish men, and Glasgow, where there are a lot of drunks, Salzburg is completely deserted at night. And I mean completely. We saw absolutely nobody in our two hours of wandering. It’s that civilised that people go to bed at 10pm and stay in bed.

We went back to the 24hour McDonalds, but it wasn’t 24hour, it was 12am-7am. I used their wifi for just long enough to establish that we could hitch out first thing and a South American would be able to host us in Vienna. We just needed somewhere for that night. Briefly, we considered pitching our tent in a park, as we had done by a gas station in Munich. But this was in a considerably more built up area, and I suspected that drifters probably wouldn’t go down too well.

At last, we found a house that was having heavy amounts of construction work done. Clearly no one was living there: the yard was rubble, but it did have an empty shed. Desperate, freezing, and at 2.30am in the morning, we crept in to escape the harsh wind, curled up, and went to sleep. Unfortunately I get vivid dreams when I’m stressed that lead to me sleepwalking and sleeptalking, so I had a nightmare that a man with a torch had found us. I woke up shouting ‘there are people beneath us!’ Another time I shivered so violently that I shook myself awake.

At 6am when it started to get light we crept out and back to the McDonalds, where we loitered outside waiting for it to open. At 6.30 a strange assortment of hipster Austrian business men wandered along too, and paced up and down outside in their pinstripe suits that stopped a few inches above their ankles, and their floppy half-shorn haircuts, glaring at their watches. When McDonalds opened we and the hipsters dashed inside for the heat and the coffee. We regrouped. I have never had a worse night of sleep in my life. We went outside. I put out my thumb by the side of the road, and I held up a sign saying ‘Vienna’, and we got the hell out of Salzburg.

Salzburg. The picture here couldn’t be further from my experience of the city.

And hopefully, those will be the last stories of homelessness I will ever have to tell. This stay in a hotel has marked a new chapter in my life of travel. While I’m sure I’ll rough it many more times, I now at least can pay for a hotel when I’m in a bind, and not have to resort to breaking and entering.