Fairytales in the Rainforest (how I became cynical about conservation work)

by Amelia Easten
in All Things Travel, Ecuador In summer 2011 I spent 7 weeks living in the Amazon Rainforest, in Ecuador doing Ecological research on the biodiversity of the area, in particular the birds. This story was written about the days I went up to stay with the locals to record some of the stories, and the days that followed in which I became disillusioned with ecological research as a way of preserving the environment and preventing the oil companies destroying the area. 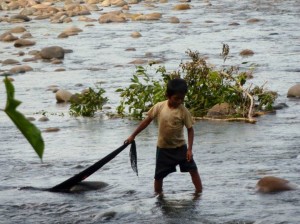 Paul, a pale gringo, arrived at our research camp in the Amazon rainforest with his two interns, Ash and Tom. Two local Ecuadorians paddled his canoe. “Are you ready?” Paul asked. I scrambled down the mud-slick bank of the river, unable to see clearly as the daylight started to fade into a tropical sunset.

I had been living in the Amazon rainforest for 5 weeks, and I was ready to see faces that weren’t those of my thirteen other team members. We were a group of students from Glasgow University, come to Ecuador to do ecological research. Paul worked with the Payamino project, a Danish organisation trying to stop the oil companies in Ecuador from buying land from the locals. He lived in the nearby village of a dozen houses and a school. I wasn’t here for just ecological research, but had another mission of my own, for my own interest. I wasn’t a scientist, but a storyteller. Paul and I were going to stay with the president. One of our guides tugged the canoe’s motor to smoky life, and we whirred off upriver.

The sky was stained vivid purple and red when we reached the president’s hut. Nearly naked small children greeted us, beating the ash out of a partially-finished canoe. To make it hollow and smooth they had burned out the centre and were now beating out the ash with branches. They were covered head to toe in soot, only their eyes shining out. Ash and Tom started emptying water out of their wellingtons. Halfway upriver we became stuck, and had braved the anacondas to climb out and push.

I watched as before my eyes the colours faded from the horizon and it flattened out into a grey expanse. I walked up the trodden down path to our accommodation. The president’s hut was the most luxurious hut this side of the village, where he also had a small breeze-block house. It was so luxurious that it wasn’t just him living there, it was also his wife, his three children, his mother, his brother, his brother’s wife, and their four children. 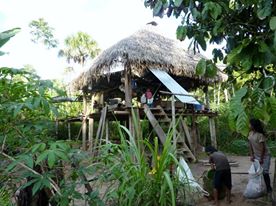 The hut was a wooden platform on stilts, about 11 feet wide and long, with a fire pit, two sleeping areas and a roof balanced on four more poles. Instead of walls, laundry hung around us proving some sort of barrier. The four of us: myself, Paul, Tom and Ash were pointed to a clear patch of floor to put our things on. “It might be a rough night,” Paul commented with a grin, handing me a thin blanket.

In the gloom, I helped the grandmother strain the yam juice for us to drink. I could just make out the children running and laughing between the yam plants that grew 9 feet high, poking just above the level of the platform. She chattered at me in the local language, Kichwan, and laughed to herself. Her face was a cheerful mass of lines and creases, like a ripe passion fruit. We used our fingers to get out the larger pieces of pulp and stringy fibre, but a good amount still remained in the drink. At least we weren’t making the alcoholic version, which would have involved chewing the yam flesh and spitting it back into the drink: the spit would then ferment into alcohol. Taste differed depending on the woman who made it.

Darkness came fast. A baby cried and was rocked by whoever sat closest, hidden by the sheet it was suspended in as a make-shift crib. A large fire crackled, and bits of burning wood floated around in the air, bright sparks and embers. Although I was enjoying the culture change, I was eager to start on what I came for. The rest of my team were scientists, but a literature student myself, I had somehow talked my way onto the expedition and was one of only two non-science majors. This was the part of the trip I was most looking forward to: I had left my team to record the stories of the indigenous tribe we were working with, one of 22 still existing in Ecuador. Paul, who spoke fluent Spanish, was with me to translate.

I was so focused on the prospect of stories that I ate without noticing the food. Two small children, a girl and a boy about 7 years old, discovered my weakness and ran around the fire pit, popping out and tickling me. The yam drink we had strained by hand earlier was passed around in a bowl, and I got a mouthful of stringy fiber.

“You need to drink it through your teeth, so that it filters it,” Paul told me, watching me as I tried to spit stringy yam out in a discrete way.

At last the dishes were cleared, but the president had disappeared. Two of the women noticed Ash’s French braided hair, and wanted their own. They hadn’t seen hair like this before. She and I sat and braided the hair of all the women and girls until, finally, the children were herded off to bed. The president reappeared and sat down, indicating to Paul that he was ready.

The fire had burned down, but outside the sky was bright with stars from the Milky Way. We were so far out from sources of light pollution that there were almost more stars than sky. Solemnly, his rough hands folded in his lap, the president recited several stories for me. They were weird and spectacular, featuring jaguars, parrots and bodily functions. Then the grandma said that she would also tell me two stories. She told them in Kichwan, translated to Spanish, translated to English. Her voice was high pitched and creaky simultaneously, like something from its own fairytale. It was past midnight when we went to bed.

I woke at the crack of dawn, the sunlight streaming through my eyelids. My body was anything but rested, as I’d slept under a thin blanket with nothing between me and the thin wooden planks. The rainforest, although tropical in the day, dropped in temperature at night – especially upriver – and I’d woken a few times shaking with cold. One of the younger children had screamed on and off all night, making sure that if I did fall asleep it wasn’t for long.

We dressed and left, heading back to the village where I would stay one more night before going back to my team. This time we were following the current, and the canoe took us back without any stops to push. Above us, the early morning sky was an almost clear blue, strands of pink lingering from dawn. Back in the village we pumped out some water and cooked a sort of soup to eat. I found out that Ash, a strong-minded girl from Edinburgh, was there because she was engaged to one of the locals.

“He wants to build a hut for us to live in, and he wants me to start having babies the moment we’re married. He wants six.”

I could tell from her expression that this wasn’t to her taste. Tom sat on the veranda in a Panama hat. He was playing a half-tune on a harmonica, which provided a curious backdrop of sound to our conversation. I felt happy, delirious with the heat, the stories, and the experience.

Paul walked up the steps onto the decking, and kicked a chair. He was accompanied by a Danish man, one of the managers of the Payamino Project. Neither of them smiled. Tom stopped playing the harmonica, and sat up. “What happened?” Ash asked. They had been at a meeting between the heads of the village and one of the oil companies currently buying up land.

“They sold a large amount of the land,” Paul replied. Ash gasped. “The oil companies just walked in, promised them a few things – a truck, a new school building, and some alcohol, and they rolled over and sold them the land. We didn’t even get a chance to speak. They have no concept of what their land is actually worth. The have no concept that if the oil companies destroy pollute the river, that’s their livelihood gone.”

The next day I returned to the research station feeling cynical and disillusioned. I continued doing the work I’d been doing before – identifying and tagging birds – but this time I wondered what the point was. A group from Glasgow University had come out to this station every year for the past thirteen years, but at the end of the day our research seemed to mean nothing. It was as though I had lived in a fairytale like the ones I was listening to, and the illusion had broken. That night, I rocked in my hammock at the research station trying to sleep. We were a half-hour canoe ride from the village, and the president’s village house, but it wasn’t far enough to block out the ‘thump thump thump’ of techno music, pumped over the treetops by his new TV.