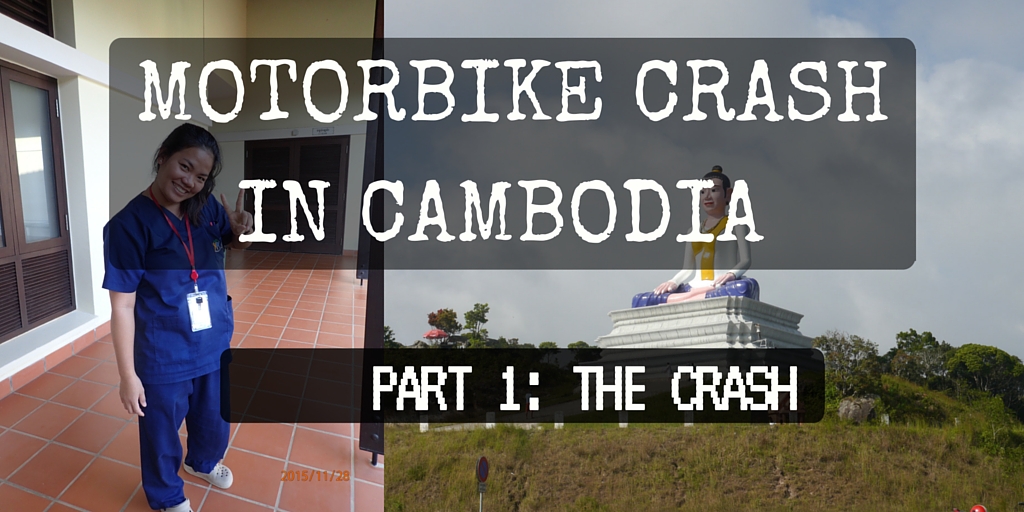 On a beautiful November day in Kampot, Cambodia, I was driving down a mountain when I got a corner wrong and the next thing I knew I was on the ground trapped under my bike. Maybe it was the PMS clouding my head, maybe I was tired, maybe it was the crappy handling on the dodgy rental scooter, maybe I was just daydreaming too much about the guy I was with and not paying attention.* Or maybe my luck that seems to charm me when I travel ran out. Whatever happened, I was relieved that I seemed okay, except for my leg being trapped. Cambodians appeared from out of the hillside and stood around staring and talking Khmer, my friend appeared too, and an American driving past saw what happened and stopped his bike to help. The two guys lifted the bike off me and that’s when I saw my knee, and the bone sticking out of my knee. 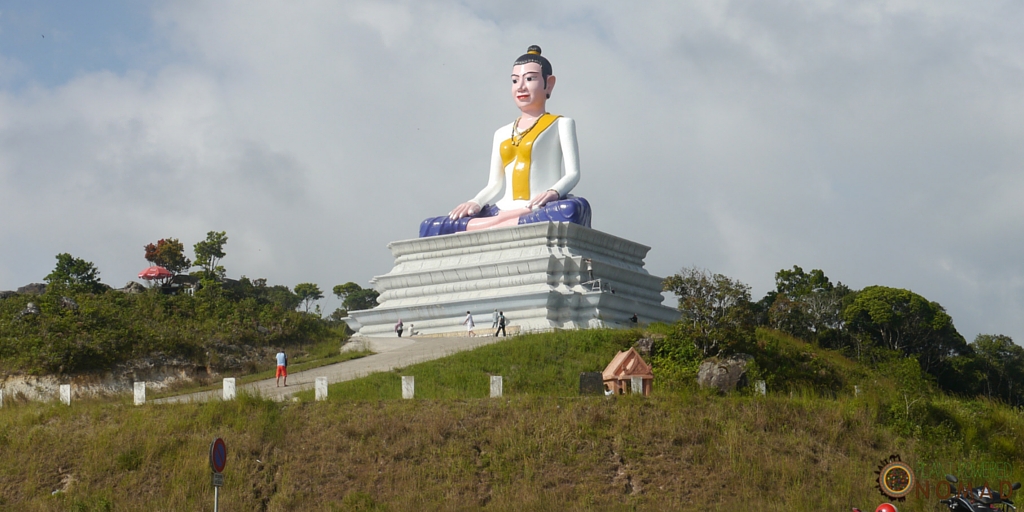 Boker mountain, the last photo before I crashed.

“She’s going into shock,” I heard the new guy say. “We need to get her to the hospital. Come on sweetheart, can you get up?” They pulled me to my feet, taking my bag from me. I got on my friend’s bike behind him, noticing the taste of blood in my mouth from a split lip and, worried, checking my teeth. All still there, but one banged. I could feel blood running down my arm from a scratch on my elbow. I felt shaky. My knee, which I was trying not to look at, was numb. I thought dimly that my leg the bike had crushed would hurt in the morning.

We were driving for barely 5 minutes when I felt something was wrong. Richard, behind us, shouted something and we pulled over. “You’ve got a flat!” he said, pointing at our back tire. The air in it was totally gone. The situation was so ridiculous that I had to laugh. Richard’s bike was a bigger bike, and not a scooter, but it was still a squeeze for the three of us to pile on, me in the middle. My 6′ friend had to hold his feet up the whole time to stop them dragging on the ground. I lost track of time, but about thirty minutes later we arrived at Sonya Kill hospital, a small and unfortunately named hospital at the bottom of Kampot mountain, where they took me into a room and lay me down. 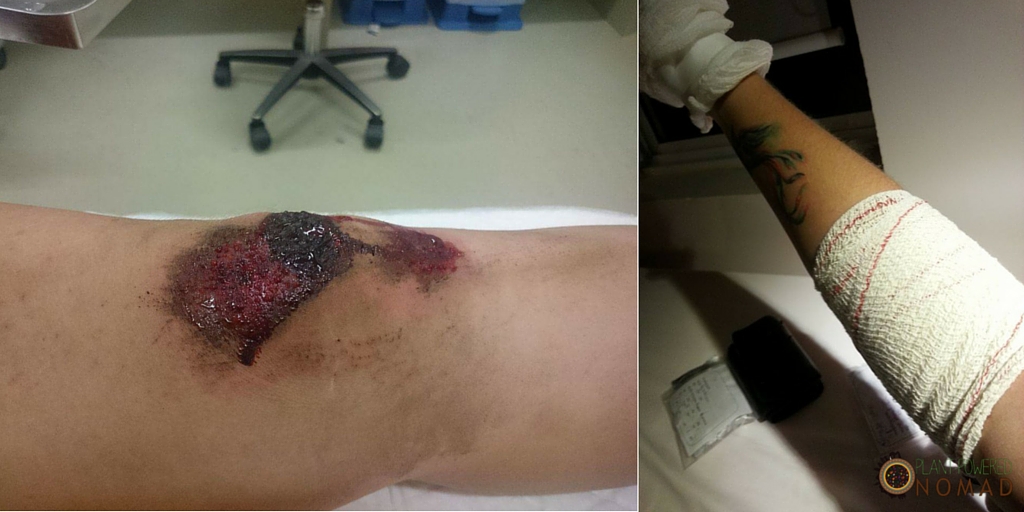 There’s bone under the dirt.

“How much your weight?” asked the pretty Cambodia nurse who was going to get me some morphine before cleaning me up. I shook my head. I hadn’t weighed myself in about six months.

“58 kilograms?” I guessed, and she repeated it to the male nurse in Khmer. He turned around and looked me up and down critically, one eyebrow raised. Then he gave me a disbelieving look and shook his head. He spoke to the female nurse.

I turned out to be 60 kilograms. The male nurse looked vindicated and wrote it down on the sheet. “Calling me fat, way to kick me when I’m down,” I muttered to my friend. I was looking forwards to the morphine though. The pain was becoming a little too much to handle. They injected me, and cleaned me up. The pain was horrendous. If I never feel someone picking rocks out of the bone in my knee again, it will be too soon. After what seemed to be forever they bandaged me up and sent me to be x-rayed to check if anything was broken. Richard was waiting outside, talking to a friendly nurse. My elbow healed fast, my ankle not so much.

“How are you doing?” he asked. I was hopping along and giggling, doing little salsa dancing turns on one leg as I held my friend’s hand for balance. “She’s had a lot of morphine,” my friend explained. I was taken into the x-ray room, and had my leg positioned in various ways. Then I sat outside in the sun and waited. Ten minutes later the doctor came out and gave me a dramatic thumbs up.

“All okay!” he told me. Nothing broken. We were all relieved, and a little surprised; it definitely hadn’t looked unbroken.

They gave me the bill: 4 hours of medical care, morphine, painkillers, antibiotics, and x-rays cost me $58. Crashing in the middle of nowhere definitely had its perks. 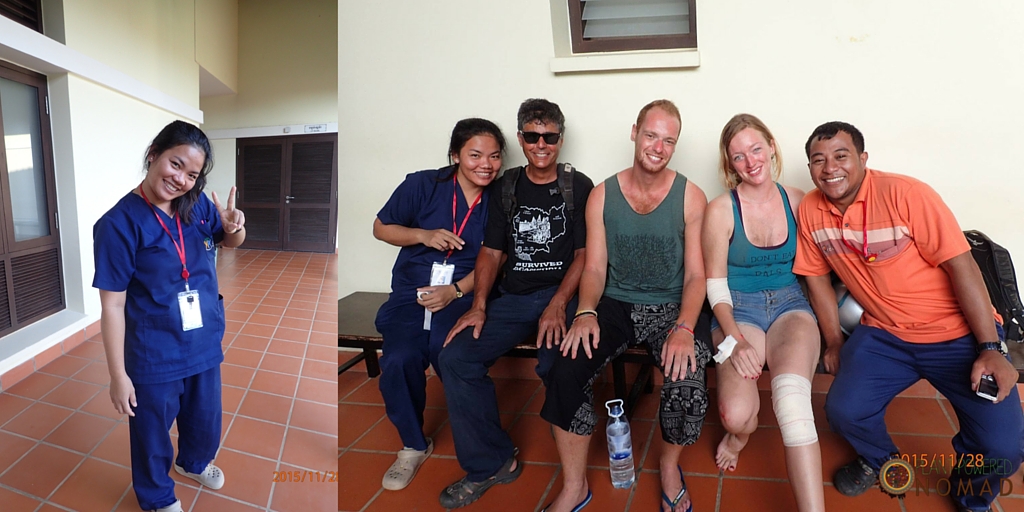 My nurse and, left to right, my nurse, Richard, my friend, me on morphine, and my doctor. Yes, that’s my doctor.

That night I had night-terrors and more than once I woke up in a cold sweat and panicked. The next day everything had swollen and the pain was in its full force. I couldn’t put any weight on my leg, and even hopping with someone to hold onto was slow and painful because of the movement. I started to realise that what I’d optimistically brushed off as something I could recover from in a week or two was going to take much longer.

The next day was bad. My friend went up the mountain with the hostel to reclaim the motorbikes, while I stayed in the room with the overweight middle-aged American woman who’d been chasing the much younger hostel manager in an attempt to bed him. In an attempt to distract myself from the pain I sat with her and listened to her tales of all the Adonis-like young men who had been pursuing her. It didn’t seem polite to question the veracity of her stories. Bandaged up, before and after.

“I’ve never been slim, but then I got this belly,” she grabbed her stomach with both her hands. “And this is just how I am, it’s never going away. But my boobs were just too big, so I got them reduced on health insurance. The surgeon was good, but the stitches on my nipples are now coming out, look,” she put one hand down her top and scooped out a tit. Sure enough the stitches around the nipple were coming out. “You okay there honey?” My eyes had glazed over from pain and I was leaning a little. “You’re in a lot of pain, aren’t you?” She glanced surreptitiously around the room, and then asked me, “do you smoke? My cousin in DC has a farm that I work on every summer for as much high grade stuff as I want. It will take the pain right away.” I was a little desperate.

When my friend came back, he looked at me, confused. “What happened to you?” he asked.

“She showed me her boob and told me sex stories and then got me stoned,” I replied. “Please don’t leave me with her again.” *I’m referring to the guy here as ‘my friend’ throughout this to keep some sense of having a private life. Read into that what you will, but yes I quite liked him.

Pin it for later: