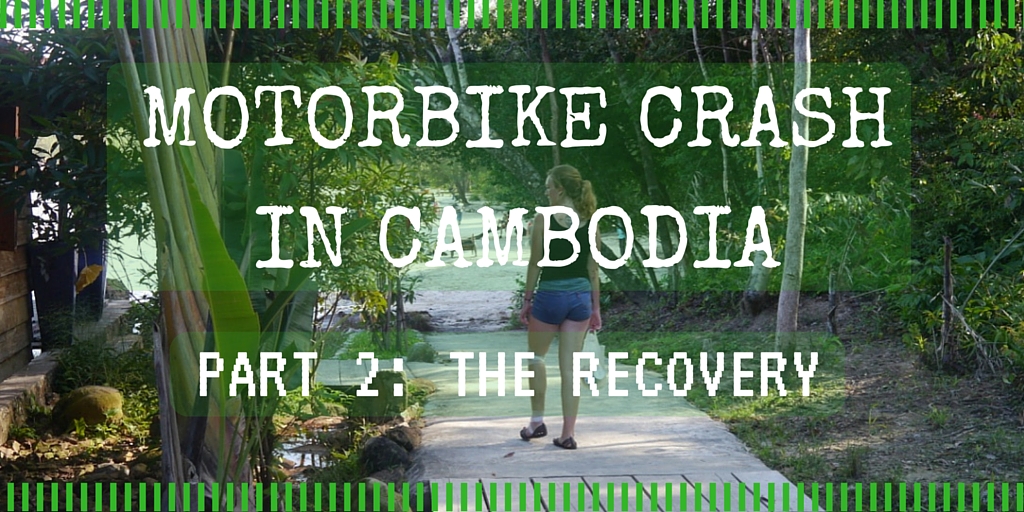 To recap: I was in Cambodia. I couldn’t walk. And the damage was seeming pretty serious. I was also alone, except for a guy who was, for now, hanging around to help me out. In my dorm room was a woman who got me stoned and flashed me, two tattooed Icelandic boys who didn’t talk, and a blur of various others who looked at me in horror as a warning tale.

I was due to arrive on Koh Rong Samloem, an island off the coast of Cambodia that I didn’t know much about. I delayed my trip there by a couple of days, until I could at least hop if I was holding onto someone’s arm. My friend decided to come with me, to keep me company, carry my bag, and be said arm. Also who can resist an island with nothing on it except a hostel? No internet, no wifi, no civilisation…

Have you spotted the catch yet? I was very injured with deep wounds. This might not have been my smartest idea.

Before we left, we went to the hospital to get my bandages changed. With us we took the newest member of our dorm-room of misfits, the man we dubbed Desperate Dan, who had been having a bit of a rough time. On this particular occasion he’d come to get his stomach checked out, which had started causing huge problems. A week ago he’d had a heart attack, after his drink had been spiked with meth, ket and MDMA by the Cambodian woman he’d had a week long romance with. He was also onto his third phone, after being scammed, losing, and breaking his previous ones. The tales were endless.

Once at the hospital he disappeared off and I was left in the waiting room in my wheelchair. A man on the other side with a tiny tiny baby noticed me staring, and beckoned me over. My friend wheeled me across and the man handed me his baby, who must have been barely a week old. I awkwardly held it as it snuffled to itself. I couldn’t quite believe how trusting this man was, that he would hand his baby to a stranger.

As I got my bandages changed, I thought it was probably wise to check that I was okay to disappear off to a tropical island. “Is there a hospital there?” I asked.

“There’s definitely a hospital on Koh Rong,” the baby-faced doctor confidently replied. Koh Rong was the next island across, and so I was reassured. Meanwhile, my friend was off getting his rabies shot. A dog had, unprovoked, nipped him on the ankle when he was at Angkor Wat, and now he was suffering a huge amount of expense and tedium trying to find rabies vaccinations everywhere he went so that he could complete his five week post-bite course. When done, we waited for Desperate Dan, who was in a mood. They had found a stomach parasite.

We reached the island without too much mishap, although swinging on and off a boat with only one leg was interesting. With impeccable timing, my friend decided to pass the hour on the boat by showing me the pictures he’d taken with my camera of when he went back up the mountain to see the parts we didn’t reach. This included a picture of my blood on the road… still there two days later. I went silent for a while.

By this time I was on some intense pain medication, and everything was dreamlike and surreal. One long boat ride, followed by a shorter one to transfer to Samloem, and we’d made it onto the island. In typical twist of fate style, the cabin we were given was the one furthest away from the main area where the food and the people were.

I spent my days by beating everyone else at scrabble (and being very modest about it). My concentration was too poor for most other things, but apparently my word skills were still working. After a couple of days the blood had soaked through the bandages and gone crusty, causing me a lot of pain. It was definitely time to get them changed, and so we started trying to make arrangements.

“Is there a hospital or clinic here?” we asked. We were told no.

“Can we go to Koh Rong? Is there one there?” They looked at us, and me, and shook their heads.

“I have to get to the hospital though,” I said, indicating my extremely dirty bandages.

He made a phone call, and told me that a boat would be leaving early in the morning and we could get to Koh Rong on that – the same boat we had come on, just going in the other direction. How we could get back remained a mystery. Likewise, whether there was a hospital also remained a mystery. They seemed to think there possibly, probably, maybe was one.

The next morning we set off bright and early, ready to go. The hostel boat took us round to the pier on the other side of the island and left us there for a while, where we were scammed into buying tickets from some guy in the restaurant who didn’t seem to be sympathetic to me needing to get medical help. When the boat arrived, the German woman covered in tattoos who was also crewing the way over looked me up and down with a ‘you again’ expression. She offered me a hand and I swung myself on.

Once we arrived on Koh Rong my friend headed off to find how we should get back. It was already 10am, and we were told that the last boat for Samloem was leaving at 12. This was much sooner than we had expected, as we knew the boat going back from the pier to the hostel wasn’t until 3. Unperturbed we made our way onto the island to find out about a hospital. While I waited, my friend went to ask and came back with the news: “he said there’s no hospital here, people always say there’s a hospital here, but there isn’t and I don’t know why they keep saying that. If we go to the bar down there, then there’s a barman called Dennis who’s a doctor.”

Dennis was a shirtless and tanned English guy who took one look at my bandages and roughly told me to go up the road to the pharmacy, where they would charge me much less and do just as good a job. To get into the pharmacy we had to step over multiple small children who were rolling around in the doorway, where a blonde girl introduced herself and told me the pharmacist was in a meeting and we would have to wait. “As long as we catch our boat,” I said. “And why are there so many children here?”

“Oh, it’s also the daycare and English centre,” she said, watching as children wandered around the floor, inches away from prescription medicine.

The pharmacist, when she arrived, was an Australian girl in her mid-twenties who ushered me into the back room and onto a grubby bench. The wooden walls smelled of damp, and old English textbooks lay spread open in the dust on the floor. The metal plate with the medical tools on it was anything but clean, I think there was even a dead spider sitting next to a scalpel.

“So were you a doctor back in Australia?” I asked, as she peeled off my bandages.

“Oh no, I came to Cambodia a few years ago and fell in love with it. Two years ago I came back and started volunteering here, and at one point I did a first aid weekend. But after two years of dealing with motorbike accidents, you get all the experience you need.” I wasn’t overly reassured, and I was very thankful that nothing more serious had happened to my wound since I had arrived on the island.

As I grit my teeth and tried not to scream as the iodine was dripped onto the open wound, a cat wandered by on the wall above me.

The boat was, in fact, not a direct boat but rather a scuba diving boat for Chinese tourists. As we lounged around in our shorts and t-shirts, they tightened their life-jackets and clung to every piece of boat they could reach. Young Chinese women took turns holding each others hair back as seasickness got the better of them. When the boat stopped in the middle of the sea, we retreated to the upper deck for some sunbathing while the tourists leapt off the side of the boat and bobbed around, still in their life jackets, hunting for fish.

Hours later, and a a little sunburned, we were deposited on the pier where eventually the hostel boat picked us up. The newbies who were arriving looked panicked at the sight of me, exhausted and bandaged. The hostel staff welcomed me back and asked if I’d managed to get my bandages changed, and I just looked at them.

“Next time someone asks if there’s a clinic on Koh Rong, please, please, tell them no.”

To be continued… as I find myself alone in Siem Reap, and with a website that’s been revenge hacked.