Nara Deerpark, Japan – Why it made me uncomfortable

by Amelia Easten
in All Things Travel, Japan 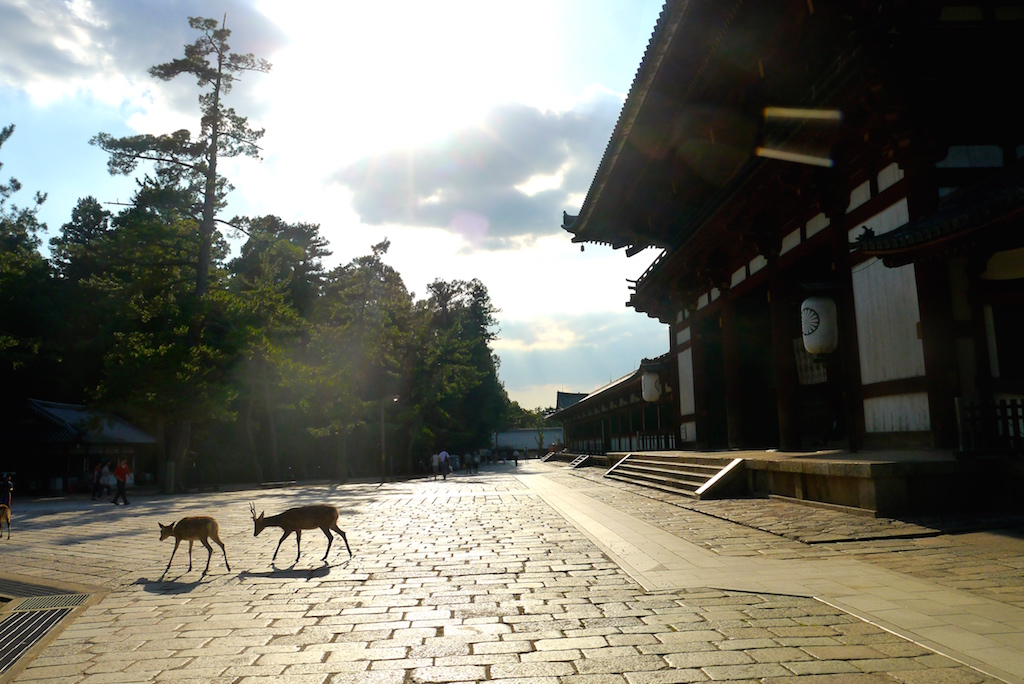 Nara deerpark unsettled me. Actually, it did more than that, I was distressed and unhappy for the majority of the time and nearly left. The thing is, nobody warned me about the uncomfortable side of Nara. It wasn’t peaceful, and it wasn’t nature. At least, not until I finally found my way round the back of the temple where there’s a huge open green area with a herd of deer and no tourists. 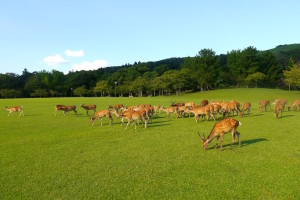 So what was it that unsettled me? Well, for a start a lot of the male deer have their horns cut off. This prevents their natural behaviour in the wild, which is to rut in mating season. Then there was the attitude of the tourists towards the deer. If girlish shrieking and deer selfies are your thing, then you’re going to be in heaven. But it was clear that a lot of people are uncomfortable around animals and viewed them as something cute, a commodity. Then when the deer moved (usually as they were taking a selfie with them) the person would scream and run away to a safe distance. The deer aren’t aggressive, but if you get in their face then, yes, they’re probably going to make a sudden movement. To get away from you. I saw women come up to sleeping fawns and start clapping loudly in their face to wake them up and get a photo. Not cool. I hope her children do that to her. And of course, if you have food, you’re going to get a lot of attention from the deer. It seemed like everywhere I looked someone was running away screaming and scattering deer crackers everywhere, followed by a small herd of confused and hungry animals. 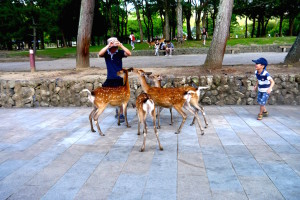 Another problem I had was the amount of trash generated by tourists that I then saw deer eating. I saw a woman throw a plastic candy bar wrapper to the ground, unconcerned that the deer she was walking past promptly moved in to eat it. Luckily a guy got there before me and removed it, but I’m pretty sure there are plenty of deer who aren’t that lucky. I saw an entire newspaper being eaten by a deer, and while paper in small quantities won’t harm an animal’s digestive system, the inks and the other chemicals that now go into papers will, in large quantities. I removed multiple other things from the mouths of deer, too, and if you’ve been to Japan you’ll know that they haven’t really caught on to the idea of trash cans. This left me wandering around with an armful of things-that-aren’t-deer-food for about an hour. I got some odd looks. 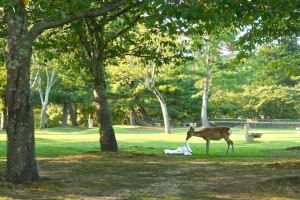 What’s in the news today?

What I took away from Nara (apart from an armful of trash) was the question of why can’t we ever let nature be? Would it be too hard to put a fence up between the tourists and the deer, and keep a little separation? Looking from a distance, and taking photos? Rather than sawing off their antlers, disturbing the fawns just trying to suckle from their mothers, and filling their digestive tracts with plastic? 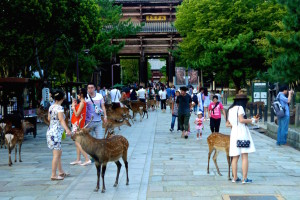 Ever noticed that you only read about the positive side of places when you’re looking into visiting, and you have to dig a little deeper to uncover the real side? Maybe I was expecting some cute fluffy fairytale of happy animals all frolicking around, at least with the outdoor animals (cafes I was always cynical about). This is not to say don’t visit Nara – just be prepared, treat the deer respectfully, and take your trash away. Maybe bring some vegetables and sit around the back away from the tourists. 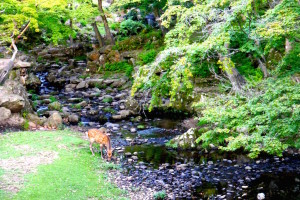 Somewhere to avoid, however, is the animal cafes. Cat cafes, goat cafes, owl cafes, llama cafes, pig cafes… the list of animals that Japan puts in a small room with cushions, cakes and coffee is extensive, and expensive. An hour in a cat cafe will set you back around 1000jpy. I passed a goat cafe that has a miserable, lonely, unhealthy and unhappy goat sitting outside in a tiny cage. If you’re going to go to an animal cafe, choose a cat cafe that has rescue cats for adoption. That way you’re not supporting the purebread cat industry, and you’re not keeping owls awake when they’re trying to sleep. 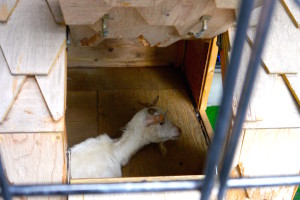 Remember, when visiting Japan, be responsible in your cute tourism.

Have you been to any animal cafes in Japan? Or to Nara? Or the animal islands? Think I’m over or under reacting? I’d love to hear from you in the comments below.