Can I go to Halong Bay without a tour? A tale of misadventure. – Plant-Powered Nomad

by Amelia Easten
in All Things Travel, Travel tales 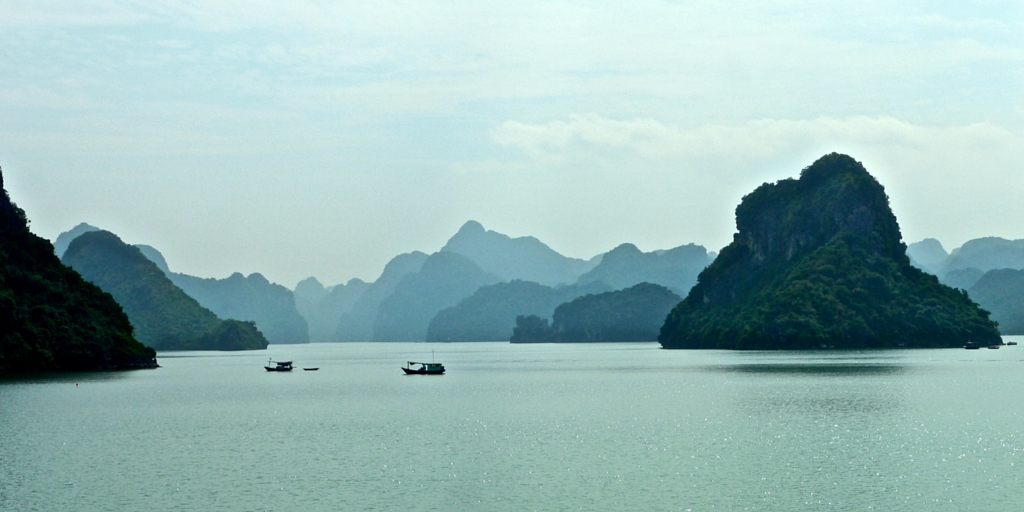 If you Google Halong bay, you’re going to turn up a lot of search results about being shepherded there. You can buy it in Hanoi, catch the bus, and see it the same way as hundreds of people every week. Or you can do it yourself, and go to Halong bay without a tour.

Be warned, this is far less smooth and navigable, but potentially far more fun.

We started out from Hanoi at 8am, stopping for coffee and breakfast and actually getting out of the city at 10 having gone the wrong way a couple of times. I’m not convinced that Google maps chose the best route for us, mainly because when we got out onto the highway the road wasn’t suitable for motorbikes, only cars. After we stopped to think for a while we couldn’t get the motorbike we had rented to start up again. A passing Vietnamese man gave us a hand.

Takeaway: plan the route yourself looking at which roads are the motorbike friendly ones. 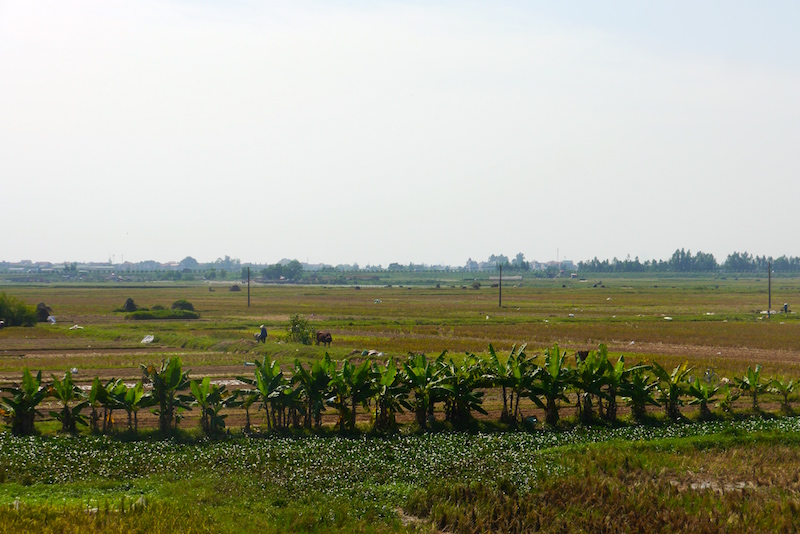 Lost in the countryside of Vietnam

Luckily, getting lost a few times and going on a very wiggly route gave us the chance to go to a few temples and sit down for a drink with some friendly mechanics who screwed a loose bolt back onto our bike. We met some cows and a huge amount of school children on bikes. Most people were very excited to see us, although our bike refused to start again and, again, we had to ask a Vietnamese man to help us. For lunch we stopped at a small shop and bought some peanuts wrapped in a strange sugary coconut flavour shell. We were pretty sure we weren’t going in the right direction, although Google maps told us that our road was parallel to the main one we should have been on. At one temple I wasn’t allowed in because I was wearing shorts. I had completely forgot that for temples you can’t wear revealing clothing. As I waited on my bike for my companion, a few dogs ran around my ankles looking a little rabid.

Takeaway: wear clothes that will not only allow you into temples, but will also stop dog bites from getting through your clothing so you don’t have to get rabies shots. 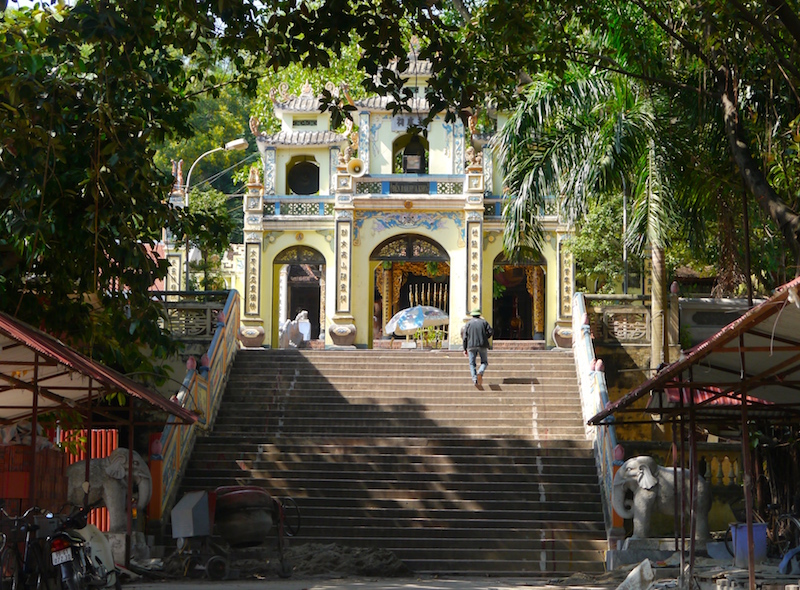 A temple we stopped by along the way.

Finally we reached a service station which was almost at our final destination. It was getting dark: we had spent the whole day on the bike. As we were getting our tank filled up, one of the gas station attendants came up to me from outside my line of view and squeezed my biceps. He then squealed like a little girl and ran away laughing to his friends while I looked at him confused. Once our bike was refuelled, we went to look for coffee. Neither myself nor my Belorussian companion could speak any Vietnamese, but we somehow found out that both of us, and one of the Vietnamese girls, could speak basic Chinese. We made basic chitchat in halting Chinese with a very strange combination of accents while another Vietnamese man came in and attempted to remove the clothing on the backs of myself and my companion to see our tattoos (both of us have back pieces). 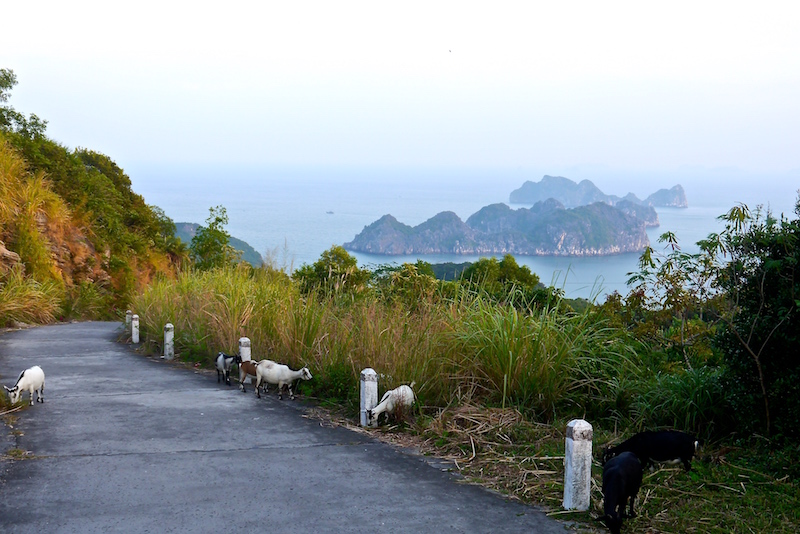 Some goats on the road making driving without brakes more interesting.

As we were leaving the gas station, we realised that neither of us knew where the ferries went from, and that it was also too late to try and get a ferry, anyway. The simplest plan seemed to be to find a beach and set up a basic shelter. As we drove for about an hour along a very built-up coastline, it became pretty apparent that this wasn’t going to happen. We finally found a very wet and dirty beach, and it was getting cold, so we retreated back to the harbour. A middle-aged Vietnamese man came up to us, and spoke a variety of languages until, again, a common one was found. This time the common language was Russian. My Russian exists but is basic, but my companion, naturally, was fluent. He was so excited to find someone with whom he could communicate with in Russian that he offered us free food and drink at his restaurant (plastic chairs and tables by the harbour and a woman with a small cooking station) and a place to stay (the floor in his spare house, which is where he kept his restaurant supplies). As it was getting late and cold, we happily accepted. His friend arrived and drank with us, although he had clearly had a head start. He became fixated with my nose ring, and every few minutes insisted that his friend translate to Russian, and then to English, that I was very beautiful. He then gave me beer, cheers-ed with me, and said “okay, thank you!” which was his only English. The restaurant owner explained to us that he is a truck driver, and he doesn’t have a wife yet so he’s always drunk. I’m a little worried I was being married off.

Takeaway: being single in Vietnam means that you’re drunk all the time, and the locals are kind and generous people. The bay as we waited for the ferry to Cat Ba.

We woke up the next morning to find that we’d been locked in. Thank goodness, my companion had the Vietnamese man’s phone number saved in her phone, and he answered and came to unlock us and let us out. We refused his offer for breakfast, and were on our way – sore and underslept. Back over the bridge and to the harbour, down to where the boats go from. The next ferry was at 11.30 – a two hour wait. As we sat drinking sickly thick Vietnamese coffee a slow but steady trickle of other motorbikes with Westerners rolled up to the docks. The woman wouldn’t let us buy tickets until 30 passengers had assembled. Eventually we had enough, and onto the boat we got.

Takeaway: the timetable is incredibly irregular and some ferries don’t run. We weren’t onto Cat Ba island until lunchtime, which was not what we had planned (we were up at 7am that morning). Our first stop on Cat Ba was the Buddhist vegetarian restaurant, called Buddha Belly. Everything they sell, except the milk for the tea and the coffee, is vegan. An incredibly kind and beautiful Italian couple were sitting at the back of the restaurant on their laptops. In exchange for food and a room, they were working for the restaurant for a few weeks redoing their website. If you’re interested in doing a similar thing, you can contact them here. When the owner discovered we were both vegan, he told us to make ourselves at home, and said we can even use the bed at the back of the room if we needed. Funnily enough, we needed a bed. Food at Buddha Belly, where we stayed the night.

After leaving our bags we took the scooter up the road to a mechanic to try and fix the brakes. He told us the brake pads were totally burned out and it would cost a lot to replace them. No wonder we had been having problems stopping. Because it wasn’t our scooter, though, and because we needed it that day, we weren’t going to get them replaced.

Takeaway: if you hire a scooter, check that it works properly before you decide to cover about 500kms on it.

Cat Ba itself is beautiful. There’s a cave which was used as a hospital during the Vietnam war, and for a token amount of money you can visit. It will only take around ten minutes to walk through, but it’s worth going to for the strange atmosphere it still has. The national park, too, is beautiful, as are the little beaches dotted around the island. For sunset, pay the money to get into the cannon fort and watch the sunset over Halong Bay. Unless there’s a noisy family there forcing their young son to take picture after picture, it’s a very peaceful place and you can wander through the army barracks afterwards. The next day we woke up early and headed back to the ferry, but decided to go to a different ferry which did a hop to one island, and then another hop to a second one. This was a mistake, because we had to wait twice for ferries and it was definitely not a tourist route but a local route.

Takeaway: if a route works, stick to it. Don’t try to be clever and create shortcuts.

We drove the 160kms back to Hanoi in about 3 hours. With dodgy brakes and two people on a scooter, this was terrifying. We had a few near misses and after that experience, I’ve always driven my own scooter rather than getting on someone else’s.

Takeaway: if you decide to share a scooter with someone else, make sure they’re not a mad Belorussian you’ve just met who didn’t bring her own toothbrush on a three day trip, but asks to use yours. Make sure they don’t drive down mountains at 80kms an hour when you don’t have brakes, however good a driver they say they are. Maybe don’t try and rush everything, and allow yourself time for one of the cruises after all. So is it possible to do Halong Bay without a tour? That was my experience. I’ll leave it up to you to decide.